Blurb:
The day the stars fell, two lives changed forever. High schoolers Mitsuha and Taki are complete strangers living separate lives. But one night, they suddenly switch places. Mitsuha wakes up in Taki's body, and he in hers. This bizarre occurrence continues to happen randomly, and the two must adjust their lives around each other.

I was lucky enough to watch one of the limited release shows of this film in a cinema hall. Before I start writing about what I thought about this film, I think a disclaimer is in order. I love anime and animated films so this review might be biased but I will be very surprised if this film does not win all the oscars in the animation category.

I cannot stress how beautiful. How breathtakingly beautiful the art in this film is. I wanted to pause each frame and try to paint it. The sky, the monuments, the colours! All of them were amazing.  I'm going to try to find pictures to illustrate my point but most of them are not the best quality. You need to see this film in HD on a big screen or in the cinema to grasp how amazing the art is! The background music fit every scene. I still feel the emotions of the characters every time I hear the piano cover of 'Date 2' {as it is called on youtube, not sure what the official name is yet}. Apart from the original soundtrack and how well it fits the movie, I cannot stress how much the different sounds that add dramatic effect fit the film. There is a gong sound that plays every time there is a focus on the female protagonist's eyes when the comet is shown in the sky. The placement of this sound is brilliant. It shakes the audience out of it's wondrous stupor. You'll realise the importance of this sound when you see the film.

The reason I was able to get immersed in the film was because of how real everything looked and how it focused on a realistic world building. There were clear cultural and geographical markers separating the urban from the rural. There was also a focus on myth making, more on that later. This is related to why the art is so breathtaking as well. The film's director focused on building the setting based on real places in Japan. You can read more on this here

The focus on myths and creating a fantastical element that focused on God and time was extremely interesting. It really made you think and helped immerse you in the film's word-building. The idea of the threads and the entire body switching plot point were extremely entertaining.

Both the protagonists were built up well. They were not one dimensional. I did think that the female protagonist (Mitsuha) could have had more build up than the male(Taki) but I understand why the focus shifted. Secondary characters were also built up well.

The film uses a lot of tropes that are found in anime and even some found in films. Gender and body swaps are fairly common in films. Animosity between the characters is also common. I can't divulge more information about the plot without giving spoilers but a lot of the plot twists are predictable and a lot of tropes are used throughout the film.

The start of the film is pretty confusing. You're as confused as the protagonists. I also felt that there was a sort of rushed relationship that was formed between Mitsuha and Taki. They seem to become best friends almost instantly. The build up of a relationship would have been more believable.

Has this happened to people in Mitsuha's family before? Her grandmother mentions it and it's never mentioned again. Their friends never question how they get such weird habits every time they switch. And one more word which could be a slight spoiler so I'm just going to mention it..... PARADOX specifically a Time paradox.

Overall, I loved the film and would recommend it to everyone. It's very close to being one of the best films I have seen in 2016 despite it's shortcomings. Let me end by saying that various individuals were crying or teary eyed when the film ended and I could not forget it even after days had passed.

In HD or you won't enjoy it as much. 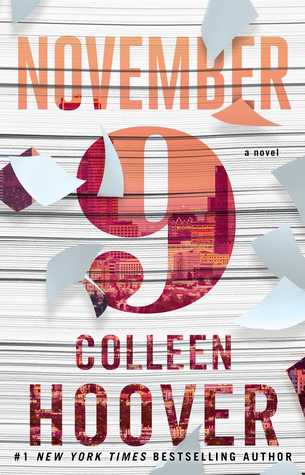 
Blurb:
Beloved #1 New York Times bestselling author Colleen Hoover returns with an unforgettable love story between a writer and his unexpected muse.Fallon meets Ben, an aspiring novelist, the day before her scheduled cross-country move. Their untimely attraction leads them to spend Fallon’s last day in L.A. together, and her eventful life becomes the creative inspiration Ben has always sought for his novel. Over time and amidst the various relationships and tribulations of their own separate lives, they continue to meet on the same date every year. Until one day Fallon becomes unsure if Ben has been telling her the truth or fabricating a perfect reality for the sake of the ultimate plot twist.

You know how sometimes you just want to curl up under a blanket , make some popcorn and watch a romantic feel good film? Well if you want to read something that gives you the same feeling look no further than November 9.

Colleen Hoover generally writes some pretty heavy contemporary fiction but November 9 is dramatic,cheesy and predictable. It reminded me of One Day in parts and I can't recommend it enough.

The climatic twist was quite predictable and extremely dramatic which was the only thing that didn't really appeal to me but the way the relationship is built up between Fallon and Ben made my heart skip a beat. It was such a cute and brilliant way for two people to connect. It's highly unrealistic but it just works in the space of the novel.

Overall, November 9 satisfied my need for romance novels even though it was a young adult novel.It's not a feel good novel but it's like popcorn for the soul that can give fodder to your loveless (or add spark to your lovefilled) life.

BLURB:
Princess Winter is admired by the Lunar people for her grace and kindness, and despite the scars that mar her face, her beauty is said to be even more breathtaking than that of her stepmother, Queen Levana.

Winter despises her stepmother, and knows Levana won't approve of her feelings for her childhood friend--the handsome palace guard, Jacin. But Winter isn't as weak as Levana believes her to be and she's been undermining her stepmother's wishes for years. Together with the cyborg mechanic, Cinder, and her allies, Winter might even have the power to launch a revolution and win a war that's been raging for far too long.

Can Cinder, Scarlet, Cress, and Winter defeat Levana and find their happily ever afters? Fans will not want to miss this thrilling conclusion to Marissa Meyer's national bestselling Lunar Chronicles series.

This review should have been up ages ago but don't worry Winter is here!

I remember reading Cinder (the first book in the series) and not being extremely impressed.But Meyer has constantly surprised by improving with each book in the series and Winter was no exception. With each book Meyer introduces more characters and as a reader I'm extremely surprised how the narrative remains coherent despite it's change in voice and constantly shifting focus.

I love how each story despite focusing on a completely new and novel idea doesn't forget it's fairy tale roots. Cinder focused on Cinderella, Scarlet on Red Riding Hood , Cress on Rapunzel and Winter focuses on Snow White. My only complaint is that it doesn't focus as much as I would have liked on the Snow White tale.

Winter ties up all the loose ends and it ties them up well. I have no need for a sequel, I am satisfied with how it ends. This doesn't mean it is a happy end but it is an end that doesn't make me want a spin off. Due to the fact that it needs to tie up so many loose ends, Winter is an extremely lengthy novel (especially when compared to other YA novels) but I think it was necessary. To keep the symmetry Meyer would have had to introduce even more characters if the story would have spanned five books and I don't think the narrative would have remained coherent.

Cress is still my favourite novel in the series but Winter is how I would have liked the story to end. I cannot recommend this series enough. It was extremely predictable in the beginning but then it kept taking me by surprise. Just hang in there especially if you love retellings or fairy tales.