Ryan Dean West is a fourteen-year-old junior at a boarding school for rich kids in the Pacific Northwest. He’s living in Opportunity Hall, the dorm for troublemakers, and rooming with the biggest bully on the rugby team. And he’s madly in love with his best friend Annie, who thinks of him as a little boy.

With the help of his sense of humor, rugby buddies, and his penchant for doodling comics, Ryan Dean manages to survive life’s complications and even find some happiness along the way. But when the unthinkable happens, he has to figure out how to hold on to what’s important, even when it feels like everything has fallen apart.

Filled with hand-drawn info-graphics and illustrations and told in a pitch-perfect voice, this realistic depiction of a teen’s experience strikes an exceptional balance of hilarious and heartbreaking.

I wanted to like this book so much. It came highly recommended, it had a mix of illustrations (comics to be exact) and text , plus it had a very interesting blurb.Despite all the things it had going for it, Winger was a huge disappointment.Voice Now I know this might upset a lot of people who loved the book because they LOVED the voice of the narrator. He sounds just like a real fourteen year old is what a lot of reviewers pointed out. I hated it. I liked it in the beginning but oh god the amount of times the guy repeats himself. By the end of the book I just wanted Chas to beat the actual fuck out of him . {I did not say that in my head Winger because in your words I have balls}The amount of times the guy uses the word "loser" in the novel will drive any sane person nuts.

Story I have never read such a weak story. The problem is not the content. I think it's more of a pacing issue. The author is good at keeping the reader's interest but he needs to say what he wants using less words. Nothing happens for long periods of time. It's just a fixed routine. If I wanted to read something so monotonous, Why wouldn't I just read an actual fourteen year old's diary.I expect more out of the fiction I read. I expect it to hold my attention and not bore me to death. 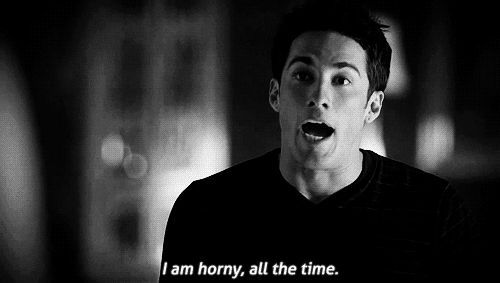 I'm afraid that this book normalizes sexism to such an extent that I could not ignore it. Girls are othered, girls are used and girls are all hot, young things who are manipulative. Don't believe me, reread the book.The Gay Issue The only likable character and storyline that SAVED this novel was the Joey plotline.*slight spoiler* And all redeemable qualities go down the drain when he is used and thrown away like a stereotypical plot arc needed for the protagonist's character development  *highlight to view spoiler*.I liked the friendship between Joey and Winger, a LOT. What I didn't like, well you'll have to read the spoiler for that.
Overall
So the only reason I am interested in the sequel is because of the cliffhanger ending. The art was beautiful but the content made me cringe. Such a waste. I'd recommend this book to misogynistic horny male teenagers because I for one couldn't relate or enjoy the book at all, maybe they will.
My Rating:
2/5
Posted by Krazzyme(Young Readers) at 1:30 PM No comments: