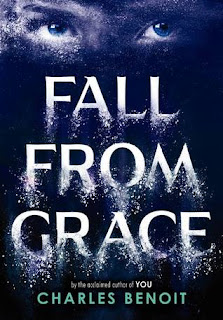 Fall from Grace
by Charles Benoit
Blurb:
Grace always has a plan. There’s her plan to get famous, her plan to get rich, and—above all—her plan to have fun.
Sawyer has plenty of plans too. Plans made for him by his mother, his father, his girlfriend. Maybe they aren’t his plans, but they are plans.

When Sawyer meets Grace, he wonders if he should come up with a few plans himself. Plans about what he actually wants to be, plans to speak his own mind for a change, plans to maybe help Grace with a little art theft.

Wait a minute—plans to what?


I'm still reeling from the ending of this book.


When I read the blurb for the first time I thought that it would be a book about art theft (like Heist Society ) but I was wrong.This book is about Sawyer and his life .Even though I was a little disappointed that this book wasn't a novel in which the characters were criminals ,I really liked this book.


This book basically deals with Sawyer and his issues.Sawyer is a bit of a pushover and his parents have basically planned out his entire life for him.His girlfriend has also planned out their entire future and she's pretty much in control of his personal life.


Here's what he knew -he had a direction and he had a plan.They weren't his,but they seemed to be working.And he had a hot girlfriend and a car of his own and a future as an insurance actuary.What was he complaining about?He had it good.
He knew all that.
But it didn't make that feeling go away.
-20% of E-ARC.Fall From Grace (This is from the uncorrected e-proof it can be changed )


I could really relate to Sawyer.I've met so many people who are in the same boat  as him .The sad part is that Sawyer knows that his parents are in control while the people that I know are in denial.I didn't like the fact that Sawyer wasn't digging his heels in and making a stand but with the parents the guy had,I couldn't really blame him.There were times when I wanted to spank him and tell him to just STAND UP FOR HIMSELF but there were also times when I  was sympathizing with him.The guy doesn't have a clue what he wants for himself and I can relate to that .


Grace is one character that I have mixed feelings about too.I liked her more than Sawyer of course but I can't say I connected with her as much (It could be because this book is told from Sawyer's perspective) .One thing I really liked about her was the fact that she did what she wanted to do and didn't have any regrets.I loved her attitude towards life and even though sometimes I thought she was pretty crazy ,I really admired her spirit.


One thing I'm not quite sure about is the writing style.I had a hard time warming upto it ,even when I was engrossed in the story.


There were times when I was really frustrated with the side characters (I think the author wanted us to be ) but the end really surprised me.All I can say is that this book is painfully realistic and I really liked that about it!