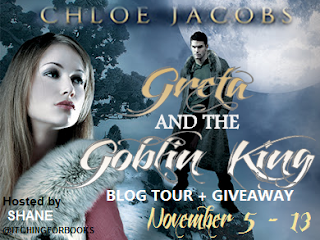 Greta and the Goblin King (Mylena Chronicles #1)
by Chloe Jacobs
BLURB:
While trying to save her brother from a witch’s fire four years ago, Greta was thrown in herself, falling through a portal to Mylena, a dangerous world where humans are the enemy and every ogre, ghoul, and goblin has a dark side that comes out with the eclipse.
To survive, Greta has hidden her humanity and taken the job of bounty hunter—and she’s good at what she does. So good, she’s caught the attention of Mylena’s young goblin king, the darkly enticing Isaac, who invades her dreams and undermines her will to escape.
But Greta’s not the only one looking to get out of Mylena. An ancient evil knows she’s the key to opening the portal, and with the next eclipse mere days away, every bloodthirsty creature in the realm is after her—including Isaac. If Greta fails, she and the lost boys of Mylena will die. If she succeeds, no world will be safe from what follows her back...

Today I have an Excerpt from this novel ...
(This excerpt is from the ARC .Changes might take place in the final copy)
The thief lifted his hand to the blade she held at his throat.
“Would you really harm a group of little kids?”
Greta didn’t know what she would do. In fact, she might be
too stunned to react at all—and that meant she had to take back
control immediately.
“Just a group of little kids, huh? Little kids who happen to
be aiming spears at me all Lord of the Flies-ish?” She snorted.
“Absolutely, I would.”
“She must be human,” he called out to the other boys as if she
wasn’t threatening to spill his very red blood on the pure white
snow. “She’s read William Golding.”
Greta drew a hard breath. “Buddy, considering the position
you’re in right now, what the deadly bounty hunter holding a knife
to your throat has or hasn’t read should be the last thing on your
mind. What you need to be thinking about are answers to my
questions.”
He sighed. “Can’t we all lose the weapons and talk like
reasonable people?”
She wanted to trust him. Humans in Mylena. Could they
possibly know how to find a portal home?
Finally, she nodded. She had to take the chance. “Agreed,” she
said. “If everyone drops their sticks and stones, I’ll put away the
knife.”
The little ones eagerly threw their makeshift weapons into the
snow. Some of the older boys grumbled a bit, but eventually they
did the same.
Only when Grumpy had added Greta’s other dagger to the
pile did she release their leader and push him clear of her.
Replacing her knife in its sheath, she put her hands on her
hips and took a closer look at the boys. They gathered together
behind the older one and as she watched, the smallest reached for
his hand, crowding into his side as if for protection.
God, they were so young.
“Who are you? How did you get here?” She bent to retrieve
the last dagger, as well as her sword and scabbard, strapping it
around her waist before returning the full weight of her gaze to
the guy who’d stolen it right out from under her. Greta had to
admit, that had been a pretty ballsy move.
“I’m Wyatt Castle,” he offered. “Formerly of a little nowhere
place in North Dakota.” He rubbed a hand over the small scrape
in his neck, but Greta only crossed her arms and waited. He wasn’t
going to get any sympathy after sneaking up on her like that.
“This is Ranier, but everyone calls him Ray.” He nodded
at Grumpy. “We’ve also got Charlie, Jack, and Sloane…and the
mean little guy here is Jacob.” He paused to muss the hair of the
boy huddled up to his side who stood looking at Greta with a wide
grin that showcased the equally wide space where his two bottom
teeth had been until probably just a few days ago.
Greta had a sudden vision of purple flannel pajamas, a pink
stuffed elephant, and her larger-than-life father putting her own
tiny molar into an empty candy tin and slipping it under her pillow
before pressing a kiss to her forehead.
She couldn’t remember exactly what he looked like, or how
he smelled, and she couldn’t remember the timbre of his voice, but
she remembered his promise that the tooth fairy would come and
leave her a dollar. He must have told her he loved her. Told her
to sleep tight. Said he’d see her in the morning, but she couldn’t
remember that either.
She shoved aside thoughts of all the nights she’d gone to bed
without those words since, all the mornings she’d wakened and
he hadn’t been there. Instead, she wondered how many other
mothers and fathers had been left wondering, waiting, but may
never know what had happened to their children. These children.

WHAT DO YOU THINK?

ABOUT THE AUTHOR
Chloe Jacobs is a native of nowhere and everywhere, having jumped around to practically every Province of Canada before finally settling in Ontario where she has now been living for a respectable number of years. Her husband and son are the two best people in the entire world, but they also make her wish she'd at least gotten a female cat. No such luck. And although the day job keeps her busy, she carves out as much time as possible to write. Bringing new characters to life and finding out what makes them tick and how badly she can make them suffer is one of her greatest pleasures, almost better than chocolate and fuzzy pink bunny slippers.

a Rafflecopter giveaway
Posted by Krazzyme(Young Readers) at 12:00 AM