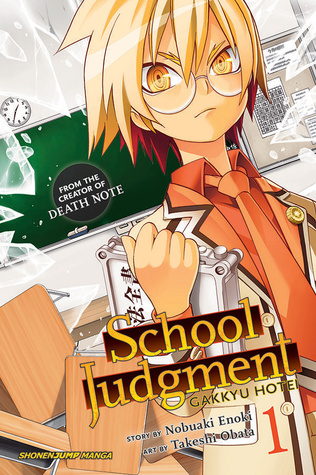 
As problems continue to plague the elementary school system, a new solution is enacted in the form of the School Judgment System! Now the young students themselves will be responsible for solving the issues that befall them! But are they up to the task?

My Thoughts:
I've been meaning to write this review for a while. I'm well versed in anime and manga (very close to becoming an otaku, dear readers!) . I usually post anime reviews on my website, Writer and Tales.Generally,I try to watch the anime of manga's that are action packed (a.k.a Shōnen) but I prefer reading the source material of other genres.

School Judgement is the first manga I have received for review which is mostly aimed at middle grade readers. I for one loved it, even though I don't belong to the intended audience so I think it's safe to say that it has universal appeal.

School Judgement is very much like a procedural drama(think Good Wife but with younger lawyers) and is very episodic in nature. Each story starts off as a case following which the protagonist is hired. Despite being a lawyer, he's more of an investigator. I was reminded a little of Case Closed. What really drew me in was the overarching storyline which focuses on the past of the protagonist, Abaku Inugami. It's clear that he had a very traumatic past and was somehow involved with and was the sole survivor of a genocide. I can't wait to find out more about his past and his prowess as a lawyer makes for an interesting read.

Some cases are outlandish and stretch the readers imagination while others deal with discrimination and bullying. They're interesting and the characters are appealing. The art is slightly cluttered but clear and easy to understand. I would love to see it adapted into an anime.I eagerly await the following volumes!

Posted by Krazzyme(Young Readers) at 11:04 AM