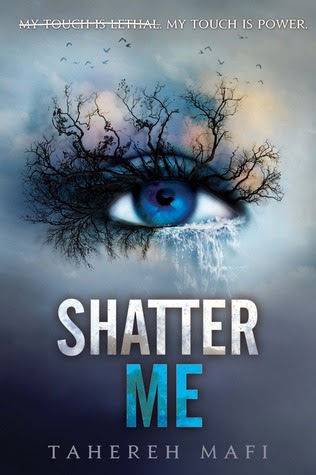 Shatter Me (Shatter Me #1)
by Tahereh Mafi
Juliette hasn’t touched anyone in exactly 264 days.
The last time she did, it was an accident, but The Reestablishment locked her up for murder. No one knows why Juliette’s touch is fatal. As long as she doesn’t hurt anyone else, no one really cares. The world is too busy crumbling to pieces to pay attention to a 17-year-old girl. Diseases are destroying the population, food is hard to find, birds don’t fly anymore, and the clouds are the wrong color.The Reestablishment said their way was the only way to fix things, so they threw Juliette in a cell. Now so many people are dead that the survivors are whispering war – and The Reestablishment has changed its mind. Maybe Juliette is more than a tortured soul stuffed into a poisonous body. Maybe she’s exactly what they need right now.Juliette has to make a choice: Be a weapon. Or be a warrior.

I've been hearing a LOT about Shatter Me for ages! Some people loved it and some people didn't like it that much. I was avoiding this book because I thought the hype might ruin it for me but I'm glad I finally bit the bullet and bought it!

This book is powerful and addictive. While you're reading it you might not realize how addicting it is but after it's over you have a NEED to find out what happens next and you want to read more about the characters.The best part is that the author manages to get you invested enough to want to follow the story without the help of a cliffhanger.

The story is written in a different way there are a lot of strikethrough's  and some people might get irritated with this but this is how the main character thinks. She's ashamed to even think these things and she can't rub them out ,so she tries to cut them out of her thoughts. I loved the fact that we could see the main characters unconscious desires and deepest darkest secrets.

Juliette is a character that I didn't fall in love with but I respect and understand her.I feel sorry for her but I don't have the urge to tell her to get it together.She's a character whose life isn't black and white.Her life is full of shades of grey.She's a very complex character. At times you question her sanity but she is the driving force behind the story.

Adam is a character who came off as too sweet to me. I was always suspicious of him. I have no idea why but I kept expecting him to transform into a super villain.Maybe that's just me though...

Warner is a complex character as well but for some reason I just liked him more than Adam. I didn't expect him to transform into a super villain because he already was one.I don't know why I like him when there's clearly something wrong with his head but I just do...

The story is interesting and keeps you engrossed till the end and at the end you're left wanting more. What more can you want from a book?

The only reason I'm not giving this book a 5 is because the romance between Adam and Juliette was too sickly sweet and screamed insta-love (This might be because I'm a Warner fan though).

Overall, An interesting book with complex characters and an interesting plot. This book stands out and leaves a big impact on you.I'm intrigued to know what happens next!

Note:
For the first time I've actually bought a novella(Destroy Me) because it's told from Warner's point of view.I'm THAT obsessed interested in this character!

Posted by Krazzyme(Young Readers) at 3:43 AM