YOU CAN BE A VII. IF YOU GIVE UP EVERYTHING.
For Kitty Doe, it seems like an easy choice. She can either spend her life as a III in misery, looked down upon by the higher ranks and forced to leave the people she loves, or she can become a VII and join the most powerful family in the country.
If she says yes, Kitty will be Masked—surgically transformed into Lila Hart, the Prime Minister's niece, who died under mysterious circumstances. As a member of the Hart family, she will be famous. She will be adored. And for the first time, she will matter.
There's only one catch. She must also stop the rebellion that Lila secretly fostered, the same one that got her killed …and one Kitty believes in. Faced with threats, conspiracies and a life that's not her own, she must decide which path to choose—and learn how to become more than a pawn in a twisted game she's only beginning to understand.

I was very wary of this book . Aimee Carter is an author I wasn't sure of because I didn't like her book The Goddess Test . The blurb of this book was so interesting that I couldn't resist but I didn't expect much. I was nicely surprised!

Pawn is an interesting novel with lots of unpredictable twists and turns. It had me exclaiming in shock in a lot of chapters and some plot twists came out of nowhere! This book has given me faith in this author. The world that Carter introduces to us is one of the best things of this novel apart from the unpredictable plot twists. There are similarities to other dystopian novels but I think by now it has become almost impossible to come up with a dystopian concept that hasn't already been used in other novels.I enjoyed the world building and became thoroughly engrossed in the story of this novel.

I think the weakest link of this novel is the love triangle .I just didn't feel it. The book would have been fine without all the love triangle angst . I want to see more rebellion and less angst over the guys in the sequel.I think I would have liked Kitty much more there hadn't been a love triangle.She's tough, she's got guts but get a guy in front of her and she looses some brain cells (I'm exaggerating , I just wanted her to REBEL throughout the book )

Overall, I'm eagerly awaiting the sequel and am now not an Aimee Carter hater.

MiraInk was kind enough to offer a copy of Pawn for giveaway. 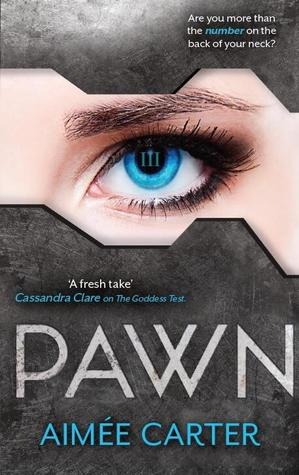 I personally love the UK cover more than the US one. What about you?


a Rafflecopter giveaway
Posted by Krazzyme(Young Readers) at 10:30 PM