Excerpt+GIVEAWAY: Hunt For The Horseman 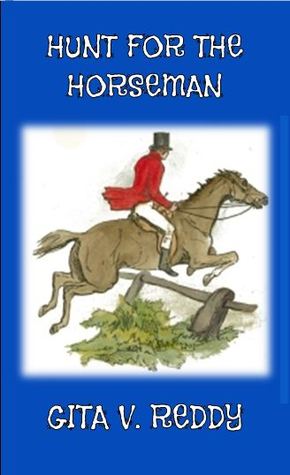 Hunt For The Horseman
by Gita V. Reddy
No dead parents; no ghosts, vampires, witches; no violence and bloodshed.


HUNT FOR THE HORSEMAN has a young girl, Sandy, visiting her extended family, in her ancestral palace, in India. She meets scads of cousins, scores of uncles and aunts, and had great fun in the palace because it has amazing hidey holes built into it by a queen who had a great sense of fun.


Sandy joins in the century old game of trying to find the horseman (a toy) hidden in one of the many secret compartments.


Where is the story? Where are the bad guys?
Believe me, they are very much there. Dangerous mafia men are out to grab the palace. Only a miracle can save the palace. And a miracle takes place....

EXCERPT #1:
The first room they entered had a lot of paneling. Avi stood on his toes and tapped a panel that was very high up. The cane was heavy and he was not holding it tightly. It swung to one side, hit a carved figure on the head, slipped from Avi’s hand, fell on a stone table and rolled on to a brass footstool. A compartment opened in the wall below a window!
“What did I do?” Avi asked, his mouth open in amazement.
They spent an hour trying to find what had opened the compartment. Though they tried the panel, the picture, the table and the foot stool again and again, they could not shut the compartment. “Maybe I broke it but it was a mistake,” Avi said but he didn’t sound sorry. He picked up the heavy cane to continue the search. Meghana was careful to stay as far away from him as possible because she did not want the stick to land on her head by another ‘mistake’. By the end of the day, they found another new hiding place and also finished checking out the ones listed.

EXCERPT #2:
Sudesh landed with a splash and went down into the black waters like a stone. He was filled with blind panic. He couldn’t breathe, his lungs were bursting with the need to breathe. He felt his heart hammering. He was going to die!
He needed to come to the surface. As he struggled, the panic receded. “I have to survive,” Sudesh told himself and begun using his swimming lessons. He made strokes to push down the water and came up to the surface and stayed there, treading water. He filled his lungs with air and turned on his back, all the time staying afloat.
The walls of the well rose high around him. It was scary. He again experienced panic. What would happen if the rest of the wall crumbled in? He would be buried in the well. He had to think of escape. He had to find a way to climb out. Until then he would have to stay afloat.
Sudesh saw footholds in the sides of the well but he would not be able to climb out using them; they were too far apart.

Liking what you've read so far?

One of FIVE kindle ecopies of this book!

Posted by Krazzyme(Young Readers) at 12:38 PM