So I wanted to giveaway something for Christmas/New Year on the blog so I bought some books. Original idea was to make it INTERNATIONAL but I've not got that much money.

Also, There is a fun event planned for January/February 2014 and the giveaways for that ARE AMAZING .

Most of them so far are US/Canada (They're so awesome that I'm SUPER jealous of you guys) so I thought I would spread some love domestically.

Also I finally made my Facebook page so I wanted to giveaway something to celebrate that as well.

BASICALLY I wanted to giveaway stuff .

GIVEAWAY
There will be TWO winners. 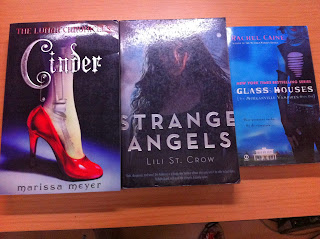 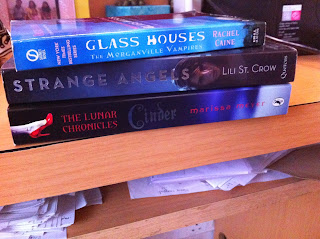 These are all books that are not easily available and are not that well known but I can personally vouch that Cinder and Glass Houses are great books. Unfortunately haven't read Strange Angels but it looks interesting.
Glass Houses is an interesting spin on vampires (according to me ) I had read it at a time when vampires were considered cute and hot and frankly I was a little fed up of the vampire hype. This book was different because vampires were horrible and the main characters were human and I liked that.

Cinder is basically a slightly badass version of Cinderella. Imagine Cinderella to be a cyborg and having a better backstory than the fairy tale version.

In Strange Angels, Dru Anderson has what her grandmother called “the touch.” (Comes in handy when you’re traveling from town to town with your dad, hunting ghosts, suckers, wulfen, and the occasional zombie.)Then her dad turns up dead—but still walking—and Dru knows she’s next. Even worse, she’s got two guys hungry for her affections, and they’re not about to let the fiercely independent Dru go it alone. Will Dru discover just how special she really is before coming face-to-fang with whatever—or whoever— is hunting her?

a Rafflecopter giveaway
Posted by Krazzyme(Young Readers) at 7:47 AM