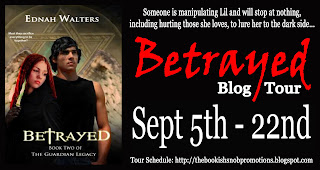 Today I have Ednah Walters,author of Betrayed(The Guardian Legacy Book #2) on my blog! She;s talking about her library! Over to you Ednah.....
MY LIBRARY
As a writer, we get sage advice from veterans in the field to read, read and read. To be a writer, you must also be an avid reader. You get a feel of the genre you plan to corner by reading books in that genre, they say. What if you love to read and it has nothing to do with what you’re writing? I’m one of those people who will read anything as long as it has a good plot. Sometimes, I read them because I want to learn something new or need help with an answer to a question. And at times, I read my children’s books.
Below if the list of some of my favorite books in each genre, from fiction to non-fiction.
Middle-Grade books:

I enjoy good love stories, tingly mysteries and wondrous adventures. When I finished college and decided to be a stay-at-home mother, I devoured books like they were going out of production, until reading just wasn't enough. So I decided to teach myself to write fiction.

I've written picture books, contemporary and romantic suspense, biracial/multicultural books, and finally YA fantasy. Most of them are still taking up RAM on my computer. Awakened is the first book in The Guardian Legacy series. It was released in September 2011 with rave reviews. Betrayed (book 2 in the series) was released August 1st 2011. Hunted, book 3 in the series, is due out in March.
When I'm not knee deep in battles between Guardians and demons, I write adult contemporary romance (the Fitzgerald family series), sassy, stubborn and gutsy women anyone can identify with and men anyone would be proud to claim. When not writing, I do things with my family, five children or my darling husband of 19 years. I live in a picturesque valley in Utah, the setting for my YA series.
NOW FOR THE GIVEAWAY!
What's up for grabs......

Blurb:Lil has come to terms with her life as a Guardian/demon hunter and the wielder of the Nephilim most powerful weapon. She trains everyday to master her growing powers, gets along with her Guardian trainee friends (most of the time) and cherishes her moments with her human friends.
Just when she feels she belongs, her nature-bender father contacts her and warns her about a betrayal by someone close to her. Then Bran, the guy she loves, starts to act strange and one of her human friends acquires a supernatural ability. While Lil struggles find a connection between these three things, she begins to realize that someone is manipulating her and Bran, and will stop at nothing (including hurting those she loves) to lure them to the dark side.
Buy the book: Amazon,BN,Smashwords
I'm  offering an ecopy of Betrayed  to any lucky commenter who answers the question Ednah has asked above! DO NOT FORGET TO LEAVE your email in the comment or a way for me to contact you!
ENDS 10/7
Also check out the Final stop Giveaway
http://ednahwalters.blogspot.com/2011/08/bookish-snob-betrayed-tour-giveaway.html

NEXT STOP:  Sept 20 –   Just One More Paragraph  http://tweezlereads.blogspot.com/
Posted by Krazzyme(Young Readers) at 5:54 AM