Review: Confessions of An Angry Girl 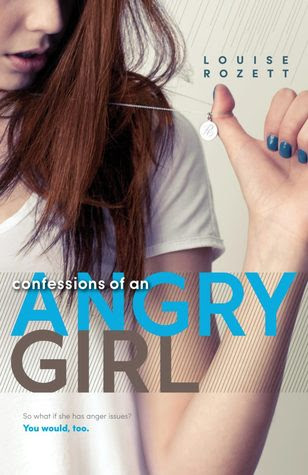 Confessions of an Angry Girl (Confessions #1)
by Louise Rozett
Rose Zarelli, self-proclaimed word geek and angry girl, has some confessions to make…
1. I'm livid all the time. Why? My dad died. My mom barely talks. My brother abandoned us. I think I'm allowed to be irate, don't you?
2. I make people furious regularly. Want an example? I kissed Jamie Forta, a badass guy who might be dating a cheerleader. She is nowenraged and out for blood. Mine.
3. High school might as well be Mars. My best friend has been replaced by an alien, and I see red all the time. (Mars is red and "seeing red" means being angry—get it?)
Here are some other vocab words that describe my life: Inadequate. Insufferable. Intolerable.
(Don't know what they mean? Look them up yourself.)
(Sorry. That was rude.)

Source: Publisher for an honest review (THANKS MiraINK! You rock!)

Confessions Of An Angry Girl is addictive and unputdownable but leaves a nasty aftertaste.

First of all I find the title a little misleading. I didn't think Rose was angry for the majority of the book. She was rude and snarky YES but not angry in my opinion. Just saw the definition of anger

Having a strong feeling of or showing annoyance, displeasure, or hostility; full of anger.
(source: Google)
Well, Rose was experiencing these emotions so she was an angry girl. I guess I just associate anger with violence and lots of screaming at people at all times and Rose did those things but not for the majority of the novel.

I liked Rose. She was snarky and sarcastic and I just liked being in her head. I loved the fact that she was a wordsmith and how every chapter starts with a new word and then she relates it to her situation.[I know WORD NERD ALERT is going through your head right now! I know :P]These are the best parts of this story and if I read the sequel it will be because of this.

What I didn't like was Rose's obsession with Jamie. WHAT is so great about this guy? I thought he was a jerk.

Rose is also pretty mean to her friends. Especially a guy who has a crush on her.
You don't like him but you don't let him off the hook either and you're obsessed with a guy who you haven't had a conversation with?

I was really frustrated with Rose in loads of specific situations.Her friendship with Tracy is also weird.

The weirdest part is the fact that I couldn't stop reading this book. I guess I expected Rose to rise above and come to her senses or maybe the fact that Rose was a trainwreck was weirdly fascinating for me and thus I couldn't put it down. I give props to the author for keeping me hooked though.

Overall, I might read the sequel but I'm not going to be dying to read it. Rose is an interesting character that fascinates and irritates me at the same time.


Posted by Krazzyme(Young Readers) at 2:48 AM