calls for a celebration!

Today I have Michelle Pickett, author of PODs on the blog .

I’m a tomboy through and through. I’d rather go hunt for night crawlers (worms) and go fishing than spend time at the mall. And, yes, I put my own worms on my hook and take my own fish off. I love to hunt for toads and turtles with my kids—I’m probably the biggest kid if the truth were known.

I love playing Black Ops on the X-Box with my son, but I suck big time. I still have fun, though. Even if my son points out that he’s killed me 57 times and I’ve only killed him twice. He’s not a gracious winner. I think I need to start practicing while he’s at school.

Okay, that’s five. I didn’t mention anything about writing because I figured you all knew that would be something about me that you may find interesting (or not). But writing is something I have to do. It’s my relaxation. My escape from the stress of the world. Getting the opportunity to share it, to be published…that’s a dream come true!
What’s next?
The Infected, the sequel to PODs releases next fall through Spencer Hill Press.
Milayna, the first book in a planned trilogy, releases March 11, 2014 through Spencer Hill. If it does well, the next books will release in the fall of 2014 and spring of 2015. So check it out. I think you’ll like it. Milayna is a sweet character, but she’s also a kick-butt type. The book is full of action and has a different spin on the angel themed books on the market today.
I’m currently working on a YA urban fantasy that will be ready for submission shortly and hopefully you’ll be hearing about that one soon.
After that, I’m not sure. I have some ideas for another post-apocalyptic, dystopian in the same vein as PODs and I have a few ideas for some YA contemporary romances. I’m not sure where my mind will lead me. But whatever comes next, I know I’ll still be writing. I just hope you’ll still be seeing me and my books around! 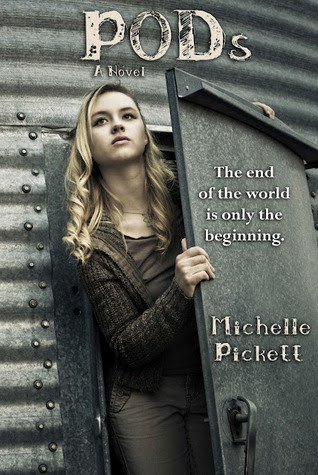 PODs
by Michelle K. Pickett
Seventeen-year-old Eva is a chosen one. Chosen to live, while others meet a swift and painful death from an incurable virus so lethal, a person is dead within days of symptoms emerging. In the POD system, a series of underground habitats built by the government, she waits with the other chosen for the deadly virus to claim those above. Separated from family and friends, it's in the PODs she meets David. And while true love might not conquer all, it's a balm for the broken soul.
After a year, scientists believe the population has died, and without living hosts, so has the virus. That's the theory, anyway. But when the PODs are opened, survivors find the surface holds a vicious secret. The virus mutated, infecting those left top-side and creating... monsters.
Eva and David hide from the infected in the abandoned PODs. Together they try to build a life--a new beginning. But the infected follow and are relentless in their attacks. Leaving Eva and David to fight for survival, and pray for a cure.

Keep up-to-date with my current, future projects, appearances, and fun giveaways at www.michelle-pickett.com.

I always love to hear from readers, bloggers and other authors!

GIVEAWAY
Spencer Hill Press has been amazing enough to offer one ARC (Advance Reader Copy) of  PODs to ONE lucky person... INTERNATIONALLY!


a Rafflecopter giveaway
Posted by Krazzyme(Young Readers) at 4:55 AM