Have You Heard: Touch by Jus Accardo

A feature on this blog in which I highlight books that
people have never heard of.They could be by  Indie authors or just books that were released but didn't leave a mark.They could even be books that are yet to be released.
This time I'm featuring.....
Touch (Denazen #1)
by Jus Accardo 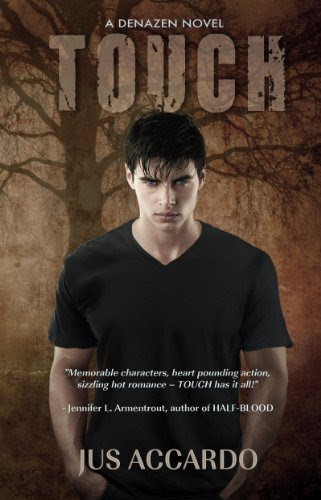 Blurb:
When a strange boy tumbles down a river embankment and lands at her feet, seventeen-year-old adrenaline junkie Deznee Cross snatches the opportunity to piss off her father by bringing the mysterious hottie with ice blue eyes home.Except there’s something off with Kale. He wears her shoes in the shower, is overly fascinated with things like DVDs and vases, and acts like she’ll turn to dust if he touches her. It’s not until Dez’s father shows up, wielding a gun and knowing more about Kale than he should, that Dez realizes there’s more to this boy—and her father’s “law firm”—than she realized.Kale has been a prisoner of Denazen Corporation—an organization devoted to collecting “special” kids known as Sixes and using them as weapons—his entire life. And, oh yeah, his touch? It kills. The two team up with a group of rogue Sixes hellbent on taking down Denazen before they’re caught and her father discovers the biggest secret of all. A secret Dez has spent her life keeping safe.A secret Kale will kill to protect.
Add to Goodreads
I LOVED THIS BOOK!
I cannot believe that not a lot of people know about this one!
BUY THE BOOK HERE:
AMAZON
BN
BOOKDEPOSITORY
FLIPKART
Posts
There might be a swag giveaway If I receive it before the end of the month .

FYI: If you've read this book and are interested in doing a guest post (review or anything else)on the blog please contact me!
Posted by Krazzyme(Young Readers) at 12:50 AM