Today I have the awesome Jessie Harrell on the blog to talk about the god of love ,Cupid

WHAT I THINK ABOUT CUPID
Let me just come right out and say it: if you're going to read and appreciate Destined, you need to go into it knowing that Eros (a/k/a Cupid) is HOT.  Free your mind from the notion that he's some naked baby or boy with wings.  This god is no Valentine's Day icon. 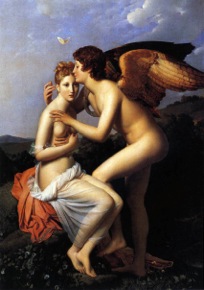 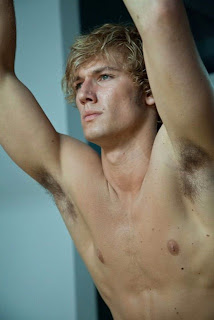 (Aside: I must admit, I wasn't always a Ryan Gosling fan.  But I like him for the role of Eros ever since my author-friend, Magan Vernon, posted this on Goodreads: "Hey girl, it's hard being a God, why don't we just cuddle." Or this one's good too: "Hey girl, you know I'd fly through the heavens for you, don't you?"  Yeah - that's the swoonworthy attitude Eros has in my mind.)
So now that we're in the appropriate state of mind, let me tell you what I know about Eros.  (Much of this is based far more on my over-active imagination than actual mythology.  I don't promise that any of this is accurate beyond the world I've happily created in my stories.) Let's start with the basics: he's the god of Love and the son of Aphrodite.  Naturally, he's a bit cocky.  He's hot and he knows it.  He also has enormous power in those little arrows he totes around, being able to force love on anyone he wishes.  And all-too-often, he inflicts heartache (or worse) on his fellow gods.  This has gotten him into trouble more than once and he doesn't have many friends among the other gods.
In the past, his antics have gotten him exiled from Greece and stripped of his powers.  It was during this fall from grace that Eros fell in love -- true love -- for the first time.  It was also then that a mortal shredded his heart.  (If you want to know the whole story, check out Before, which is a free short story.)
AMAZON Link for Before

Eros came back from the experience acting like a college frat boy with a vendetta.  He pretty much hates mortal girls and he lets his temper and his lust drive his actions.  I don't expect you to like this Eros.  There's not much redeeming about him.  (Except the hair, eyes and muscles.  There's always that!)  But deep inside, is a playful spirit and a heart that aches to love again.  It just takes a lot to break through that tough exterior and find those qualities.
If you know your mythology, then you know Pysche is the mortal who finally cracks open his protective shell.  She brings out a side in Eros that is tender, protective, and selfless.  He takes her on moonlight flights to the ocean and dines with her under the stars.  He pulls out all the stops in his romantic bag of tricks to win Psyche's heart.  But even love can't make his temper entirely recede and there might not be a happily-ever-after for Eros after all.
If you want to know more about the Eros that I know, I invite you to pick up a copy of Destined.The story is told in alternating points of view between Psyche and Eros.  You see a lot more from her perspective, but you learn enough about Eros to fall in love with him right along with Psyche.  Move over Prince Charming - you've got nothing on the God of Love.
WHAT ARE YOUR THOUGHTS ON CUPID?


I was also curious about somethings ,So I asked a few questions...


Why did you choose to be an  indie/self publisher?
There are so many reasons that went into my decisions, but the primary factor was that Destined was ready and Greek mythology was hot last year in young adult.  I didn't want to miss the reading trend while waiting a year or two for a traditional publishing deal.  Plus, I had full creative control over my cover, which was awesome.  Indie has been a lot of work, but there are also a lot of rewards if you're in a position to be able to invest in yourself.

What's next for you ?

Hoping that my co-written novel, entitled Beneath the Surface, finds a home and comes to life soon.  It's a blend of Greek mythology and paranormal set in present day Michigan. Tag line: A timeless love. An endless curse. Which one will survive the summer?

Song you're listening to
Payphone by Maroon 5


TV show you love
There's only 1 TV show that I take the time to watch regularly -- True Blood.  The rest of the time, I'm usually glued to my computer

Jessie Harrell is the author of Destined.Here is the blurb and the gorgeous cover

Destined
by Jessie Harrell
When Psyche receives a prophecy gone horribly wrong, she learns that even the most beautiful girl in Greece can have a hideous future. Her fate? Fall in love with the one creature even the gods fear.
As she feels herself slipping closer into the arms of the prophecy, Psyche must choose between the terrifyingly tender touch she feels almost powerless to resist and the one constant she's come to expect out of life: you cannot escape what is destined.
Goodreads,MY REVIEW,Amazon
Find Jessie Harrell : Goodreads,Blog,Twitter,FB
GIVEAWAY
One person can win an ecopy of Destined.The author will send the ecopy via Amazon,B&N,Kobo,iTunes or Smashwords (WINNER's choice)
THIS GIVEAWAY is INTERNATIONAL!
a Rafflecopter giveaway

Posted by Krazzyme(Young Readers) at 1:17 AM