Pretty Crooked (Pretty Crooked #1)
by Elisa Ludwig
Willa’s secret plan seems all too simple: take from the rich kids at Valley Prep and give to the poor ones. Yet Willa’s turn as Robin Hood at her ultra-exclusive high school is anything but. Bilking her “friends”—known to everyone as the Glitterati—without them suspecting a thing is far from easy. Learning how to pick pockets and break into lockers is as difficult as she’d thought it’d be. Delivering care packages to the scholarship girls, who are ostracized just for being from the “wrong” side of town, is way more fun than she’d expected. The complication Willa didn’t expect, though, is Aidan Murphy, Valley Prep’s most notorious (and gorgeous) ace-degenerate. His mere existence is distracting Willa from what matters most to her: evening the social playing field between the haves and have-nots. There’s no time for crushes and flirting with boys, especially conceited and obnoxious trust-funders like Aidan. But when the cops start investigating the string of thefts at Valley Prep and the Glitterati begin to seek revenge, could Aidan wind up being the person that Willa trusts most?
Expected publication: March 13th 2012
I've got this one on my kindle and I liked the first chapter! Hope the whole book is as good as the cover is pretty! 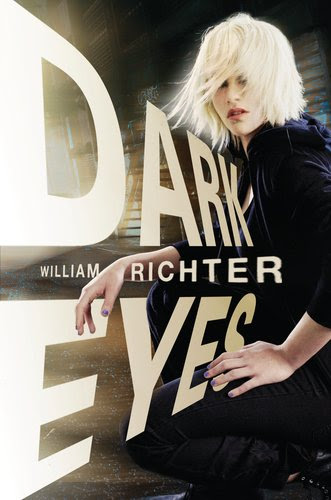 Dark Eyes
by William Richter
Wally was adopted from a Russian orphanage as a child and grew up in a wealthy New York City family. At fifteen, her obsessive need to rebel led her to life on the streets.
Now the sixteen-year-old is beautiful and hardened, and she's just stumbled across the possibility of discovering who she really is. She'll stop at nothing to find her birth mother before Klesko - her darkeyed father - finds her. Because Klesko will stop at nothing to reclaim the fortune Wally's mother stole from him long ago. Even if that means murdering his own blood. But Wally's had her own killer training, and she's hungry for justice.
The Girl with the Dragon Tattoo for teens, this debut thriller introduces our next big series heroine!
Expected publication: March 15th 2012 by Razorbill
WHAT ARE YOU WAITING ON?
Posted by Krazzyme(Young Readers) at 12:46 AM