Review + GIVEAWAY: With All My Soul by Rachel Vincent 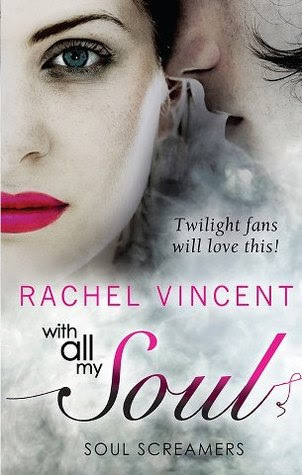 With All My Soul (Soul Screamers #7)
by Rachel Vincent

blurb
After spending the last year undead, Kaylee Cavanaugh has had enough of the paranormal creatures who have plagued her ever since she came into her banshee powers. Now she's ready to take her school back from the evil hellions, once and forever.
To protect her friends, Kaylee will need to find a way to turn the living incarnations of Avarice, Envy and Vanity against one another.
Yet when one more person close to her is taken, Kaylee realises she can't save everyone she loves without making some powerful sacrifices...


Source: Publisher for an honest review ( I HEART you MiraInk!)

This is the LAST book in this series.


I cannot believe that I won't be reading about these characters anymore!

I have been avoiding this book like the plague and I probably wouldn't have finished reading it till next month if not for Fiktshun's reading challenge deadline. Thank you Rachel @ Fiktshun and Shelley @ Tsk Tsk What to Read for the push, I needed it!

It was time to say goodbye to the characters I've come to love and hate over the span of seven books and It was hard! SO HARD!

Tod , Kaylee, Sabine,Emma,Harmony,Nash,Sophie,Luca,Levi,Madeline,Ira,Ben and every single character part of this amazing world... I'M GOING TO MISS YOU!

It's hard to say goodbye and I tried very hard to avoid it but once I started reading I couldn't stop! I finished the entire book in one day i.e yesterday .

Rachel Vincent pulls you into this amazing world and doesn't let you go till the very end.She leaves you wanting more!

Rachel is an amazing writer. Loads of times books loose their pace and allure as the series progresses and writing a story that goes on for seven books is not easy but she manages to pull it off. The last three books in the series have been AHMAZING and If someone asked me which is the best book in the series I think I'd have to think really hard. There were some(to be exact just two) books in the series that were a little disappointing (Especially Book 4 ) but this is one series I would recommend to almost everyone. The character building is great and the author does not hesitate in breaking the rules.

Character building is important and the characters in this series have depth and are more than just caricatures. The relationships are built beautifully and the emotions felt by the characters are experienced by the reader. I could easily connect and form a relationship with the characters even though I didn't have a lot in common with them.

Kaylee is a strong heroine who uses her brain. She may have come across as love struck and a naive girl in the beginning of the series but she's not one anymore. She's selfless and at times willing to go to any lengths to protect the ones that she loves. In a way she's become wise and has realized that the world works in certain ways.

Nash is a character I've had a rocky relationship with. I never loved his character. He came across as too sweet and understanding at first and that made me suspicious. My suspicions were justified and there were a lot of things that he did that I hated but I understand his reasons.I don't hate him anymore.

Tod is a character I loved   love. I liked him from the very beginning! He had a minuscule part to play in the first book but this sarcastic and funny guy left his mark.Tod is my favorite character from this series and I think I'm gonna miss him the most.

Sabine is a character that at times I HATED with a vengeance but it's hard to hate someone who speaks the truth and calls out people when they're lying to themselves. I think this is one character that I have grown to like and even love as the series progresses.

All the secondary characters (there are too many to name) are memorable and have a story to tell and Rachel tells that story beautifully.

I don't want to give away spoilers so I'm not going to write much about the story except for the fact that it was gripping but at times I found it to be predictable.I knew that a particular incident was going to happen and that is why I wasn't surprised when it did but that doesn't mean that the book was boring or didn't hold my interest. Sometimes it's the journey that is important and this is one journey that has had a lot of ups and downs.The final conclusion is one that nobody should miss out on.

Overall, this is one series I think everyone should read. It starts off slowly but keep in mind that character building cannot be rushed.The final conclusion did not disappoint me and that in itself is an achievement. I cannot wait to read another series by Rachel Vincent.Anathema release soon PLEASE!

*This review is part of the Don't Let It End Challenge and  WAMS  mini-reading challenge hosted by Fiktshun.

You guys might have guessed already but I'm a huge FAN of this series and I wanted to giveaway this book as part of my blog's second birthday!

This giveaway is INTERNATIONAL!

Don't forget to enter the previous giveaways that are still going on.....

Up for grabs: One copy of With All My Soul offered up by the AHMAZING peeps at MiraInk!


a Rafflecopter giveaway
Posted by Krazzyme(Young Readers) at 2:58 AM