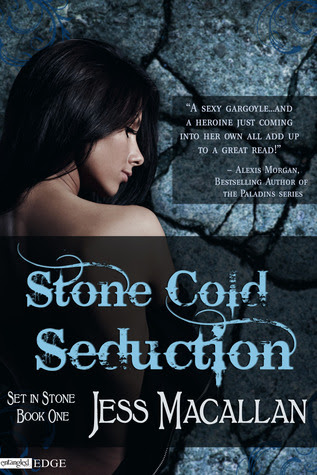 When a regular night of Robin Hood-ery results in the manifestation of some, um, unusual paranormal abilities, perfume-maker Elleodora Fredricks realizes the normal world she lives in isn't quite... normal. And neither is she, thanks to her father, king of the shadow elves. Not only is he evil incarnate and the reason Elle moonlights as a burglar someone has to take care of all his victims he s stolen her memories.
And only reading her fate can fix that.
Good thing she's got a trio of hotties willing to help her find said fate, but only if she gives them something in return. Saving her oracle BFF's fiance, falling in love with the gargoyle, and making up for breaking the phoenix s heart ought to be a piece of cake for the princess of the shadow elves.
If only the king didn't want his daughter dead..

Source: Publisher for an honest review (Thanks Entangled!)

This book started off really well. The characters are different and I love the fact that it's not your average run-off-the-mill urban fantasy with vampires.It has phoenixes and gargoyle's . The introduction and build up of the story was brilliant. The start really reeled me in and got me very excited.

Fortunately the Jax-Elledora relationship is just a part of this novel. The best part about this novel are the various twists and turns and Elle's friendship with Teryl. I also enjoyed the flashbacks .There is a love triangle but it's not a full fledged one yet. I think it will definitely be a major plot point in the second book but I'm actually looking forward to it. I for one want Elle to get with MacLean. (Team MacLean FTW!) The Jax-Elle relationship just doesn't seem real and felt a little botched up to me.MacLean and Elle have a history and I can't wait to find out more about it.

The story is always affected by how good the villain is and this book has an EVIL villain.You actually feel scared of him. Elle's father is a formidable opponent for her and that is what helps to keep this story interesting.

Towards the end the pace slips up a little bit and I got disconnected with the story but that doesn't mean that I've lost interest in the characters.I'm still interested in getting my hands on the sequel!

Overall, this book is full of adventure and is unpredictable but it has it faults. I expected much more from it.

Posted by Krazzyme(Young Readers) at 3:49 AM