Review and Interview with a GIVEAWAY!

Toxic (Denazen #2)
by Jus Accardo
BLURB:
When a Six saved Kale's life the night of Sumrun, she warned there would be consequences. A trade-off. Something taken for the life they gained. But Dez never imagined she'd lose the one thing she'd give anything to keep... And as if it's not enough Dez finds her immunity to Kale fading, the Six brought in to help Kale learn to control his killer touch starts drooling on him the moment they meet. Worse than that? Jade can touch Kale. But bimbo Barbie is the least of Dez's problems.
After Dez and Kale got away at Sumrun, her father lost not only his most powerful weapon but an important piece of the Supremacy project. Forced by Denazen to remedy the situation, he poisons Dez and offers her a choice--surrender to Denazen for the cure...or die. Determined to find a solution that doesn't involve being bagged and tagged--or losing someone she loves--Dez keeps the poison a secret. But when a rash of Denazen attacks hit a little too close to home, Dez is convinced there's a traitor among them. Jade.
Sacrifices, broken promises, and secrets. Dez will have to lay it all on the line if there's any hope of proving Jade's guilt before they all end up Residents of Denazen. Or worse, dead...

Source: Publisher for an honest review

I loved Touch.It was a great novel and I couldn't wait to get my hands on Toxic.I screamed in delight when I received Toxic for review.

I was disappointed with this novel.One thing I want to make very clear is the fact that I don't like reading books that are sad and depressing. This book was sad.I understand why the author wrote this novel and I realize that this book really helped in the development of  the characters and gave the characters a lot of depth but I didn't enjoy this novel as much as Touch.

Dez  frustrated me in this novel.I wanted to hit her but I could understand and  relate to her insecurities.

Kale was as awesome as ever but I felt that Kale wasn't there in a lot of crucial moments and really missed him in this novel.Throughout the novel I wanted more Kale.There was one scene in which I was very irritated with him and couldn't understand why he did what he did (SPOILER: His rationale behind kissing Jade was weird! )

Jade is a new character and I disliked her but I don't hate her.

I felt that the characters really grew up in this novel.The depth of Kale and Dez's relationship was always a huge question mark in my mind but in this novel I understood and could appreciate it's depth.

In Touch I always thought that it was possible that Kale's feelings towards Dez are superficial .Are they? Well you'll just have to read this book to find out.

Tensions are high in this novel and a lot of lives are at stake which is what kept me hooked throughout.

Overall, This book is more serious than the first but it answered a lot of questions that I had about Kale and Dez. This book was an emotional roller-coaster. The only major problem I had with this book is the fact that it ends with a cliffhanger. Cannot wait for book #3!

Songs you're listening to
I’ve been listening to the Tremble playlist a lot lately. Some of my faves from it are:
Puscifer – Undertaker “Renholder Mix”
Adele – Someone like you
Powerman 5000 - Bombshell

TV show you're obsessed with
I’m kind of loving Arrow…although I’ve had to watch it online because our evil TV peeps dropped the channel!

What after Toxic?
I’m working on new books for the Denazen series, as well as a new YA series.

How many books in the Denazen series?
The world of the Sixes is huge with quite a few stories to tell. I don’t have an exact number at the moment, but there will be more!

Should we keep our hopes up for a happy ending to the story of Kale and Dez?
They deserve one, don’t they? I’d say yes. Keep hope alive! The road won’t be easy, but there is a light at the end of the tunnel ;) I promise.

Where did you come up with the name of Dez?
It was totally random. I do gravitate toward names starting with D, K, and S, though…

JUS ACCARDO spent her childhood reading and learning to cook. Determined to follow in her grandfather’s footsteps as a chef, she applied and was accepted to the Culinary Institute of America. At the last minute, she realized her path lay with fiction, not food, and passed on the spot to pursue writing. Jus is the author of YA paranormal romance and urban fantasy fiction. A native New Yorker, she lives in the middle of nowhere with her husband, three dogs, and sometimes guard bear, Oswald. Her first book, Touch was released in November 2011 from Entangled Publishing. She is currently working on the next book in the Denazen series.
Give Jus a yell on Twitter, or visit her on Facebook, and her website. 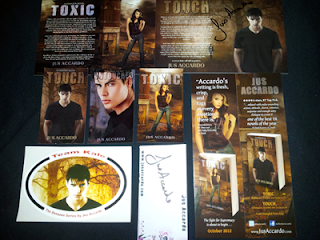 Entangled Teen is giving away an awesome swag pack at my blog!

This pack consists of:

Posted by Krazzyme(Young Readers) at 12:30 AM