As part of The Serpent's Ring blog tour I'm posting an excerpt and a guest post!

Excerpt from The Serpent’s Ring
Claire squint her eyes and pursed her lips. After a minute, her face turned red, a rush of air released from her mouth, and she collapsed against the seat.
Evan laughed. “Seriously, you are as loony as the imp.”
“At least, I’m trying to do something here! What about you? Aren’t you going to try?” Claire bellowed.
“No,” said Evan flatly.
“Evan, an enormous flyingfish swooped down and stole the Serpent’s Ring from your arm. We are in a Model T with an imp, and the sky is tangerine with rainbow-colored clouds. Humor me, and try to move this blasted car with your mind!” said Claire, grabbing Evan’s shirt collar. “If you don’t, I will make your life miserable. Got it?”
Evan looked at Dunkle, then back at his sister before saying, “Fine, I’ll do it. But just for the record, this is bizarre.”
Dunkle gave him a little smile, and Evan brought in a breath of air. He imagined the tires turning, but nothing happened.
“See, I told you. This is ridiculous,” he sighed.
“No, try again,” encouraged Dunkle.
Evan rolled his eyes and then stared at the steering wheel. He concentrated and concentrated. Suddenly, the Model T swayed and lavender mist billowed from underneath the car.
“Whoa, what happened?” asked Evan, his eyes wide.
“You, my boy, are telekinetic,” said Dunkle with obvious delight.
“Come on, Evan, try it again,” Claire encouraged.
“You can do this. Just imagine the wheels turning,” instructed Dunkle.
Evan looked back and forth between Claire and Dunkle. After careful deliberation, he closed his eyes and imagined he was pushing the tires around and around. Suddenly, he felt the car rock and heard his sister gasp. He opened his eyes. Not only did the tires roll, the entire flippin’ car was floating!
“Argh!” Evan shouted, and with that, the car fell, producing a startling jolt.
“Ouch!” Claire yelped and swatted her brother. “Why did you drop us?”
“Am I the only one here who finds it the tiniest bit odd that we were flying in a Model T?” shouted Evan.
Claire placed her hand on his shoulder. “Evan, yes, it is strange. But if we don’t get over it, then according to Dunkle, everything we care about will soon be covered in water. I’m not any happier than you are, but I’m trying to deal with it and so should you.”
Evan took another second to collect himself before sitting upright and taking hold of the front seat. “I think this will work better if I’m behind the wheel,” he said, jumping over. He looked at Dunkle, who nodded.
“Ready?” Dunkle asked.
“As I’ll ever be,” said Evan, his bare white knuckles clutching the wheel.
Again, he filled his lungs with air and concentrated. To his surprise, the car lifted and hovered in place.
“Now, forward,” instructed Dunkle.
“Wicked,” said Evan, as air blew through his hair and whispered into his ears.
“Be very careful; you must continue to concentrate and don’t look down,” said Dunkle.
Evan hadn’t considered looking down. But now that Dunkle mentioned it, he just couldn’t resist. Evan peeked over the car door, and the Model T fell.
“Concentrate! Don’t lose your focus!” shouted Claire.
The car froze in place, and from that moment on, Evan resisted peeking over the side. 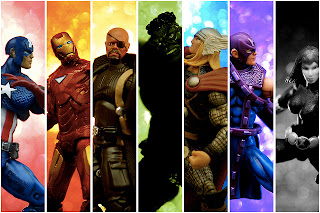 Superheroes — who doesn’t love them? Not only does each one have a unique power, their costumes are pretty awesome as well. Most of them are strong, kind and always eager to help. Common folks look up to them and strive to reach a higher level of perfection. But what would happen if an average kid was given a superpower? How would he match up to the superheroes everyone adores and respects? What if he was flawed, just like the rest of mankind? What if he didn’t wear a cape or flashy clothes? And what if he was just asked to save the world?
Evan Jones and his sister, Claire, started their morning as normal teens, but that changed as soon as they found the Serpent’s Ring. Not only was it stolen from them, it altered their DNA. Evan soon learned, through the help of a bossy little imp named Dunkle, that he was telekinetic. Meaning, he was able to move objects with his mind. His first attempt at using his newfound power was when he was given orders, by Dunkle, to fly an old Model T.
Soon after landing the antique car near Lake Huron, Claire was instructed to use her new power of transfiguration. Dunkle explained how she could transform the shape of an object and change it into anything she wanted. Her first task was to melt sand and form it into a glass Viking ship. After all, how else would they sail to Asgard?
The Serpent’s Ring is the first in a series, Relics of Mysticus. Each book will bring Evan and Claire into a different realm of mythology, where they must search for and keep all of the relics safe. Each relic is powerful in its own right, and each relic can offer a new power when the siblings come in contact with it. What new powers will Evan and Claire gain on their magical adventures?
If you could have one superpower, which would it be? What would your costume look like?

The Serpent's Ring (Relics of Mysticus, #1)
by H.B. Bolton
BLURB:
Evan and Claire Jones are typical teenagers, forced to go with their parents to yet another boring museum ... that is, until something extraordinary happens to make their day a little more than interesting. After following a strange little creature into a closed exhibit, Evan and his older sister, Claire, discover the Serpent’s Ring, one of the magical relics formed from the shattered Mysticus Orb. Purely by accident, they have awakened its powers and opened a portal to Sagaas, land of ancient gods.
Before the siblings can comprehend what has happened, the Serpent’s Ring is wrenched from Evan’s hand by an enormous bird and flown back to Aegir, the Norse god of the sea. Evan and Claire, accompanied by a band of unlikely heroes, must retrieve the Serpent’s Ring before Aegir uses its immense powers to flood all the lands on Earth.
ADD TO GOODREADS 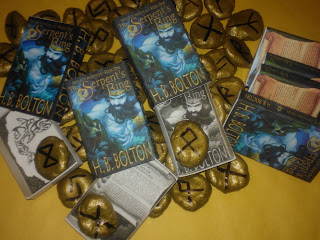 OPEN INTERNATIONALLY!
paperback copy of The Serpent's Ring, a Rune Treasure box and a signed bookmark.

Posted by Krazzyme(Young Readers) at 12:00 AM