Dark Seeker (Seeker #1)
by Taryn Browning
For 17-year-old Seeker, Janie Grey, ridding the Baltimore streets of the undead is an inherited duty passed down from her Cherokee ancestors. Seeker Training Lesson #1: Never trust the undead. After her father’s tragic death, Janie creates her own life lesson: Love isn’t worth the risk. Both lessons are easy to follow until she encounters the flawed Kai Sterdam. At first, she believes he is the hybrid she is trained to hunt. But, when he has human traits, she determines she doesn’t know what he is. As Janie’s intrigue over who Kai is pushes her deeper into his mysterious past, she discovers a shocking truth that is even more harrowing than the evil they are up against. It’s a secret Kai wants to keep hidden, especially from Janie.
Here's an excerpt from this book....
There had been a rash of unexplained deaths in the area. Janie figured the murders had to do with the growing population of Daychildren. Ever since she reached the age to Seek, more and more had been born. True vamps were usually not a problem anymore. They seemed to be evolving, wanting to live among the human world without issue. They looked down upon demons. Most vampires had no interest in drinking a demon’s filthy blood, let alone changing a demon into a vampire, creating the vampire/demon half-breed known as Daychildren.
“Find any?” Kai said. Janie jumped off the curb, tripping on a crack in the asphalt. She righted herself. He started to laugh. “It just kills you that you can’t feel me coming.”
“What do you want?” Letting her heart return to its proper place outside of her throat, Janie reached for her dagger.
“Whoa, you don’t need that. I’m not going to hurt you. I could’ve already killed you.” Kai put his hands out. “You’re still alive, aren’t you?”
“Is this fun for you? Some kind of game?” Janie retrieved the blade from her boot. She didn’t trust him.
“Your eye looks awful.” He pointed to her bruised face.
Janie stared at the three jagged scars lining his forearm. White lines appeared where new tissue had formed. Judging by their location, they appeared to be defensive wounds, as if he were protecting his face from something or someone. She thought it odd. Vampires, or Daychildren, in Kai’s case, didn’t scar. Their bodies healed quickly without leaving a mark. She guessed the scars had formed during his human days.
She ignored his comment about her eye. “You know I have to kill you. It’s my job.” Her eyes flicked to his waist. His scythe glistened under the light of an overhead lamp post. Thirty degrees outside, and he wore a T-shirt. Lucky for him, Daychildren didn’t feel temperature. Janie, on the other hand, could feel every bit of the biting cold, and she shivered.
Kai nodded, ignoring her. He looked in the direction of the parking garage. “Did you hear that?”
“What?” Janie clenched her jaw. He distracted her. She couldn’t do her job with him around. “If you’d stop talking to me, I could listen.” She held her breath and focused into the distance. A girl screamed.
“The parking garage.” Kai jumped off the curb and took off in a blur.
“Uh—he’s too fast.” Janie shoved her dagger back into her boot and raced into a full sprint toward the garage. She ducked under the arm gate and curved up the ramp. She arrived at the first floor and stood in between the rows of cars, listening for any sound. The screaming had stopped, but Janie’s skin still crawled. 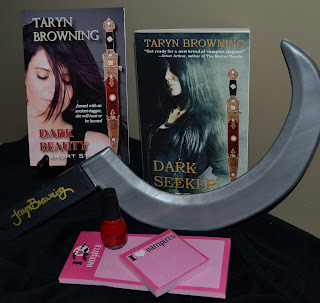 If you comment on every post that is part of the tour you can win the things that are shown in that picture!
SEE SCHEDULE and more details about grand prize here
This giveaway ENDS 12/31.
Please check out the other giveaways going on at this blog too! Links can be seen at the top :)

Posted by Krazzyme(Young Readers) at 12:46 AM