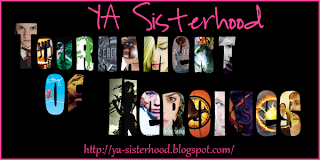 You need a reason to vote for her??

Here are some of my favorite quotes....


Percy: Don't I get a kiss for good luck? It's kind of a tradition.Annabeth: Come back alive Seaweed Brain then we'll see.The Last Olympian


I've been waiting a long time for a quest, seaweed brain. Athena is no fan of Poseidon, but if you're going to save the world, I'm the best person to keep you from messing up."
-- Annabeth Chase (from the Lightning Thief)

Once she was gone, I knelt next to Annabeth and felt her forehead. She was still burning up. "You're cute when you're worried," she muttered. "Your eyebrows get all scrunched together." "You are not going to die while I owe you a favor," I said. "Why did you take that knife?" "You would've done the same for me." It was true. I guess we both knew it. Still, I felt like somebody was poking my heart with a cold metal rod."
`The Last Olympian

"Monkey bar," Annabeth said. I'm great at these." She leaped onto the first run and start swinging her way across. She was scared of tiny spiders, but not of plummeting to her death from a set of monkey bars. Go figure.
`Battle of the Labyrinth

"What if it lines up like it did in the Trojan War ... Athena versus Poseidon?" "I don't know. But I just know that I'll be fighting next to you." "Why?" "Because you're my friend, Seaweed Brain. Any more stupid questions?"


Still not convinced? Check out the whole post here