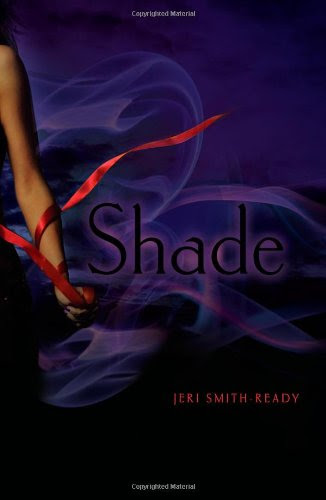 by Jeri Smith-Ready
Love ties them together. Death can't tear them apart.
Best. Birthday. Ever. At least, it was supposed to be. With Logan's band playing a critical gig and Aura's plans for an intimate after-party, Aura knows it will be the most memorable night of her boyfriend's life. She never thought it would be his last.
Logan's sudden death leaves Aura devastated. He's gone.
Well, sort of.
Like everyone born after the Shift, Aura can see and hear ghosts. This mysterious ability has always been annoying, and Aura had wanted nothing more than to figure out why the Shift happened so she can undo it. But not with Logan's violet-hued spirit still hanging around. Because dead Logan is almost as real as ever. Almost.
It doesn't help that Aura's new friend Zachary is so understanding—and so very alive. His support means more to Aura than she cares to admit.
As Aura's relationships with the dead and the living grow ever complicated, so do her feelings for Logan and Zachary. Each holds a piece of Aura's heart...and clues to the secret of the Shift.
Source: Won from Brooke Reports. (YOU'RE AWESOME BROOKE!!!!)
Links: Amazon,Bookdepository,BN,Flipkart
Note:Not recommended for younger readers due to some drug use and other scenes.
My Thoughts:
This book starts off with a bang! The author doesn't waste time by explaining things in the beginning but that doesn't mean that you're lost due to the complicated storyline.
I was afraid to pick up this book because I'd heard such good things about it ,but I shouldn't have been worried.This book is as good as everyone keeps saying it is!
I have to say by the end of this book ,I realized why Zachery got to the finals of the YA crush tournament.He is one awesome character! I love patient guys and I have to say this guy is just...WOW! I'm team Zachery guys! Team Zachery all the way!Logan's hot and all but somehow he came off as self centered and a little bit of a jerk...just like any other normal guy .Zachery breaks the mold people!He breaks the mold!HE IS AWESOME!
*I needs to  listen to some Scottish accents!*


I liked Aura she wasn't perfect but she's been through a lot! This is one heroine I can deal with.She doesn't whine.My only complaint is the fact that she's not sarcastic if she was , she'd be in my list of best heroines of all times.She does take some pretty bad decisions(according to me) so you might want to smack her but you don't hate her!
Logan is one character I just couldn't put my finger on.Sometimes I thought he was hot and sometimes I just thought he was a whiny wannabe and sometimes I thought he was just cute.
Overall the story is interesting and I would read this one for Zach again!
I'm not going to pick up the next book till Shine comes out though,even though this one ends in a cliffhanger!
My Rating:4/5 STARS
GOOD!

The first song I listened to as soon as I finished this book:
Posted by Krazzyme(Young Readers) at 12:26 AM