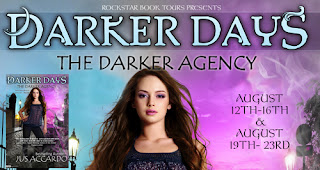 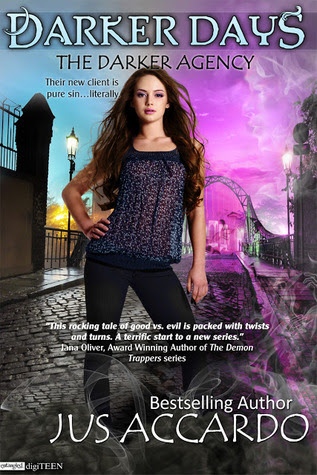 Darker Days (The Darker Agency #1)
by Jus Accardo
Jessie Darker goes to high school during the day, but at night she helps with the family investigation business. Cheating husbands and stolen inheritances? They’re your girls—but their specialty is a bit darker. Zombie in your garage? Pesky Poltergeist living in your pool? They’ll have the problem solved in a magical minute. For a nominal fee, of course...
When gorgeous new client, Lukas Scott, saunters into the office requesting their help to find a stolen box, it sounds like a simple case—until the truth comes out. The box is full of Sin.
Seven deadly ones, in fact.
They’ve got five days to recapture the Sins before they're recalled by the box, taking seven hijacked human bodies with them. Easy peasy—except for one thing...
There’s a spell that will allow the Sins to remain free, causing chaos forever. When the key ingredient threatens the life of someone she knows, Jessie must make the ultimate choice between love and family—or lose everything.

I loved Jus Accardo's debut novel Touch and even though I wasn't a HUGE fan of the sequel I know that she's a great author that is why I've been interested in this novel ever since the blurb came out.

Darker Days is a great book and has restored my faith in the author. I'm definitely going to read more books by her now! I would like to warn you though, that there are quite a few similarities between some of characters in Touch and Darker Days. One thing I noticed was how just like Kale , Lukas was naive and didn't know how the modern world worked but I was enjoying the novel so much that I was willing to look these over .

I loved Jessie.She's snarky,sarcastic and has awesome one liners.I love the fact that she's not concerned with dating and doesn't keep talking about hot guys all the time. The girl is not superficial and I love that about her. I would suggest you read this novel just for her.

Another thing I would like to mention is the fact that parents do play a pretty large role in the novel which was nice.Damien (Jessie's father) is one character I would love to see more of in the sequel. For some reason I really like him.

There were quite a few twists and turns especially towards the end of the novel.I couldn't predict almost any of them .

This book reminded me a little bit of the Soul Screamers series by Rachel Vincent but it isn't as serious as that series so if you're looking for something like it you could check out this book.

Overall,I for one am dying to read the sequel.

I'm bending more towards the 4 stars though 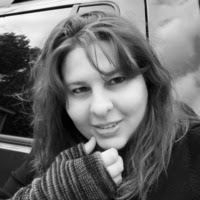 JUS ACCARDO spent her childhood reading and learning to cook. Determined to follow in her grandfather’s footsteps as a chef, she applied and was accepted to the Culinary Institute of America. At the last minute, she realized her path lay with fiction, not food, and passed on the spot to pursue writing. Jus is the bestselling author the popular Denazen series from Entangled publishing and is currently working on the first book in a new adult series due out summer 2013. A native New Yorker, she lives in the middle of nowhere with her husband, three dogs, and sometimes guard bear, Oswald.
Find Her: Website/Twitter/Facebook/Goodreads

a Rafflecopter giveaway
Posted by Krazzyme(Young Readers) at 12:55 PM