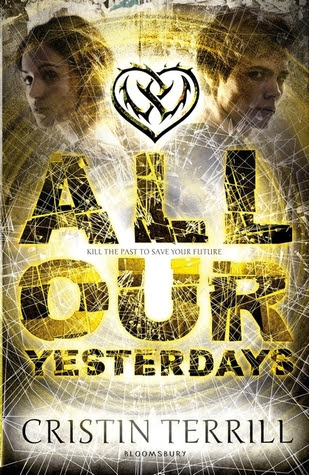 All Our Yesterdays (Cassandra Chronicles #1)
by Cristin Terrill


Blurb A brilliantly brain-warping thriller and a love story that leaps back and forth in time - All Our Yesterdays is an amazing first novel, perfect for fans of The Hunger Games.
Em is locked in a bare, cold cell with no comforts. Finn is in the cell next door. The Doctor is keeping them there until they tell him what he wants to know. Trouble is, what he wants to know hasn't happened yet.
Em and Finn have a shared past, but no future unless they can find a way out. The present is torture - being kept apart, overhearing each other's anguish as the Doctor relentlessly seeks answers. There's no way back from here, to what they used to be, the world they used to know. Then Em finds a note in her cell which changes everything. It's from her future self and contains some simple but very clear instructions. Em must travel back in time to avert a tragedy that's about to unfold. Worse, she has to pursue and kill the boy she loves to change the future 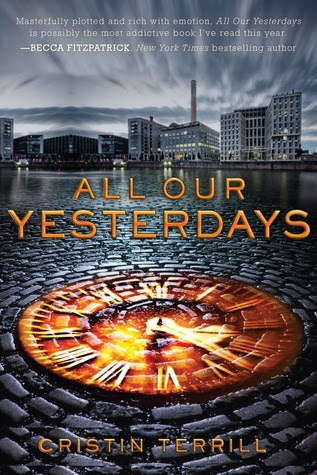 All Our Yesterdays starts off in a manner very similar to Shatter Me but in the third or fourth chapter, you can see that this novel deals with things that series does not.

What does this book deal with, you ask? It deals with time travel and love and paradoxes .Now I, for one, am fascinated by time travel but almost every novel I've read about time travel so far has been disappointing. The best thing about this novel is the fact that it becomes VERY clear that time travel is central to the plot but the focus of this novel is not time travel.(I hope this makes sense) Anyways, the time travel element is never forgotten and I love how it's used in this novel. Well done Ms. Terrill , especially for a debut novel.

This novel is told from dual perspectives and at first it's a little confusing but only for the first two or three chapters after that it makes perfect sense (to me atleast because I figured out why the perspectives were needed and whose perspective it was from ). I must say this way of writing the novel is brilliant, because it's something different yet similar.(Avoiding SPOILERS)

Aside from the writing style, the first half of the book was good but as I had such high expectations, I was a little disappointed. The second half is unpredictable and pretty great.So I understand the hype and even though I'm not in love with the novel ,I really liked it.

Em is such a relateable character.She's mature and she's going through a lot! I really liked her and admire her strength and how she follows her gut.

Finn is a character I wanted to learn more about.I liked what I saw, but I want to see more. I especially want to see more of him showing off his computer genius skills.

Marina is like a typical teenager.Even though she should have irritated me, she didn't because I can see why she's acting the way she is. Also her character grows a lot in this novel and I loved seeing that growth.

James is a character that is flawed and is going through a lot.I don't hate him .

The doctor is a character that I hate. That is ALL.

Overall, this is a great novel that can be read as a standalone. I have no idea what the sequel will be about because this book doesn't end with a cliffhanger (YAY!!) but I'll most probably be reading the sequel. (Unless and until it gets horrible reviews. Then I would like to finish the series at it's high note)

Posted by Krazzyme(Young Readers) at 9:03 AM