Jennifer Armentrout,author of the amazing Half Blood(I've read it!!) signed a new YA book deal!
The books name is ..... 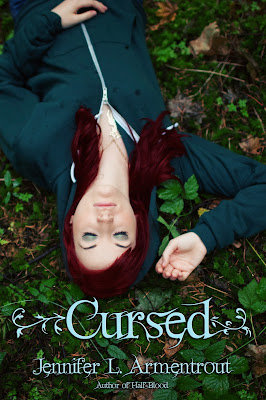 CURSED
Dying sucks--and high school senior Ember McWilliams knows firsthand. After a fatal car accident, her gifted little sister brought her back. Now anything Ember touches dies. And that, well, really blows.
Ember operates on a no-touch policy with all living things--including boys. When Hayden Cromwell shows up, quoting Oscar Wilde and claiming her curse is a gift, she thinks he’s a crazed cutie. But when he tells her he can help control it, she’s more than interested. There’s just one catch: Ember has to trust Hayden's adopted father, a man she's sure has sinister reasons for collecting children whose abilities even weird her out. However, she’s willing to do anything to hold her sister's hand again. And hell, she'd also like to be able to kiss Hayden. Who wouldn't?
But when Ember learns the accident that turned her into a freak may not've been an accident at all, she’s not sure who to trust. Someone wanted her dead, and the closer she gets to the truth, the closer she is to losing not only her heart, but her life. For real this time.

I don't know about you,but I am dying to read this book!Look at the cover,it's so gorgeous
Expected publication:September 2012 from Spencer Hill Press.
You can find the author here:
http://twitter.com/#!/JLArmentrout
http://jenniferarmentrout.blogspot.com/