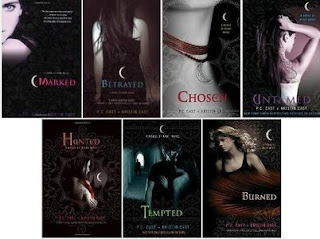 I decided to review the whole series in one post.
Please note:I have not read Awakened so I will not be writing a review of Awakened in this post.
Caution:This is going to be a LONG post!
Summary :Enter the dark, magical world of the House of Night, a world very much like our own, except here vampyres have always existed.(Please Click on the title to go to individual book summaries)
Source:Library
NOTE:THIS SERIES IS NOT SUITABLE FOR YOUNG READERS!(Really guys! IT IS NOT AT ALL SUITABLE FOR YOUNG READERS)
Lets start with book 1....

by P.C. Cast, Kristin Cast
Thoughts: I did not like Zoey Redbird at all! The story did not catch my interest and was very predictable. I don't know how I managed to finish this book.This book made me realize that Twilight is genius! I wouldn't recommend this book to anyone!
The only thing I liked about this book was Zoey's group of friends.
Rating:

Why I picked it up:Well,things couldn't get worse and I was curious.
My thoughts:It was definitely better than Marked thanks to.......................(drum roll please)
Stevie Rae(Zoey's best friend)
She was funny.
I am still not a fan of Zoey.....she gives meaning to the words shady and bimbo(those were not the word I wanted to use but I don't want to use bad words).Make up your mind and choose a guy already,Zoey! You're leading on all of them.

Why I picked it up: Book 2 was better ,So I decided to give this one a shot.Plus,my friend said it gets better.
My Thoughts: I really don't like Zoey.Wasn't it bad enough that she was leading on two guys that they added ANOTHER guy to the mix?That too a *spoiler alert* teacher *spoiler ends*
The height!
Saving grace:Zoey's friends(i.e  Erin Bates,Shaunee Cole,Damien Maslin and Stevie Rae)
I think I forgot to mention the fact that the antagonist is also very weak in this series.Usually,you're scared of the antagonist but not in this series!Half the time I'm wondering why Zoey's is even scared of the antagonist.(Guess I don't find her scary)
My Rating:

Why I picked it up: I really don't know
Thoughts: Thank you P.C and Kristen Cast for FINALLY adding/introducing us to some new and interesting characters in this bland and  so-not- interesting series!
If you really want to try this series, I would suggest starting it from this book.Zoey is still.......well Zoey, but finally there is an antagonist I can actually take seriously!
Stark ,thank you for being the normal guy in this series !!(personality wise)
The story finally becomes interesting and We see some good leadership qualities in Zoey(yeah,right!)
This  book was pretty good,actually!(even,I was surprised)
My rating:

Why I picked it up: Untamed was good,that's why!

My thoughts:I will be honest...I don't really remember what happened in this book because I read hunted and tempted together and it all seemed to be a part of the same story.
The story deteriorates(i.e It's not as good as Untamed)
but it was definitely better than the first,second and third books in this series.
My Rating:

Why I picked it up:The series was becoming better.Plus, my friend kept on nagging at me to read it.

My thoughts:As I said before,I don't really remember what happened in this book as I take Hunted and Tempted to be the same story told in two different parts.
One thing I do remember is the fact that it was almost as good as Untamed and much better than the first three books in the series(*SHUDDERS*).I really liked the ending because it was unpredictable.
I am now positive that Kalona,Stark and Stevie Rae are the only characters that can salvage this series as I have given up on Zoey.
My Rating:

My thoughts:This book is the ONLY reason that I'm glad that I read this series.
The reason.....
It's told from various individual's perspective!!!!(I did mention the fact that I don't like Zoey ,right?)
This book is told from Stevie Rae's,Kalona,Stark etc. point of view and I really liked this.The other reason I'm in love with this book is the fact that Zoey actually sticks with only ONE guy throughout this book!That in itself is a miracle.The story was unpredictable and well written.The characters relatable and the book had  a really good cliffhanger ending.
I finished this one in one day! It was that good!Pity you have to go through all these books to reach this one.
My Rating:

WHAT ARE YOUR THOUGHTS ON THIS SERIES? HAVE YOU READ IT??
Posted by Krazzyme(Young Readers) at 9:46 AM